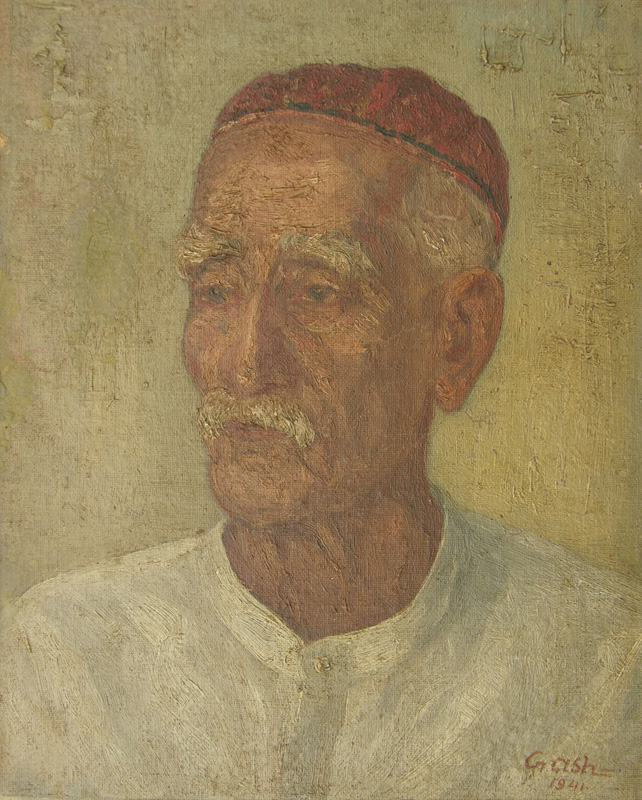 Gobardhan Ash was born in 1907 in Begampur, a village in Hooghly district, West Bengal. In 1926, he joined the Government School of Art in Calcutta and further studied at the Government School of Art in Madras in 1930. It was under Roychowdhury, the principal, that he initiated into the rugged school of ‘realism’. But, Ash never nurtured an inclination towards the highly skilled academic realism and departed towards the confident flamboyance of the impressionist technique. He was an important member of the ‘Calcutta Group’ of 1943. He had always been a prolific artist, painting and sketching many portraits and self-portraits, landscapes and life around.

Ashturnedoutalargenumberof landscapesinhabitedby weary, toiling people reflecting the social misery and stagnation of the painter’s surroundings. A parallel set deals with intimate figures in close-up. While the people in the landscapes appear as faceless, unidentifiable beings ground into anonymity by unrelenting poverty, the figurative compositions are unfailingly direct and mark each characters individuality. These two sets done simultaneously reflect the artist’s view of life, the two facets of human existence; man is his collective struggle for survival against the prevailing conditions, and man the individual in his solitary moments, when he is uniquely himself. This portrait done by Ash is that of his own Urdu teacher.