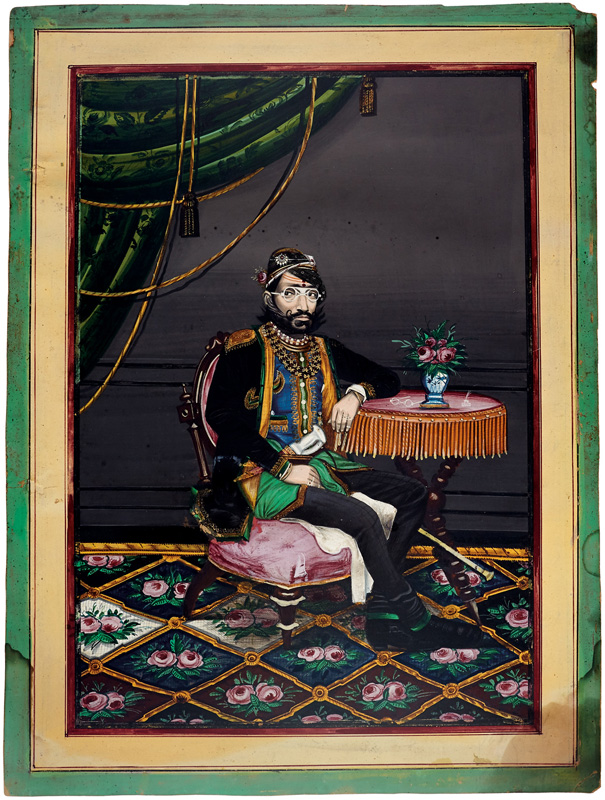 by Jaipur court artist
circa 1860 CE

Many of Ram Singh II’s paintings and photographs done in a similar pose and details can be found in various different collections.

Maharaja Sawai Ram Singh II’s reign is marked with development and reform. He established a number of public institutions including schools and colleges, hospitals, public parks and museums, and worked immensely for the betterment of infrastructure like building of roads, the provision of gas street lighting, piped water and laying of railway lines. Influence of visiting European painters and introduction of camera had a lasting impact on art practice of local artists in his reign and they adopted photo-realism, naturalism, and techniques like oil paint and watercolour. Reference for majority of his portraits can be found in his self-taken photographs.

Maharaja Sawai Ram Singh II is depicted here in his signature imperial moustache, split beard and spectacles. A pair of spectacles are placed on the round table along with a vase from which he has taken a rose to decorate in his turban. Folded velvet curtain in background draws European drapery style. Fine detailing of the texture of his combined (western and Indian) clothing allows one to distinguish different textiles like velvet overcoat with brocade, silk waist cloth, cotton trousers and leather boots.