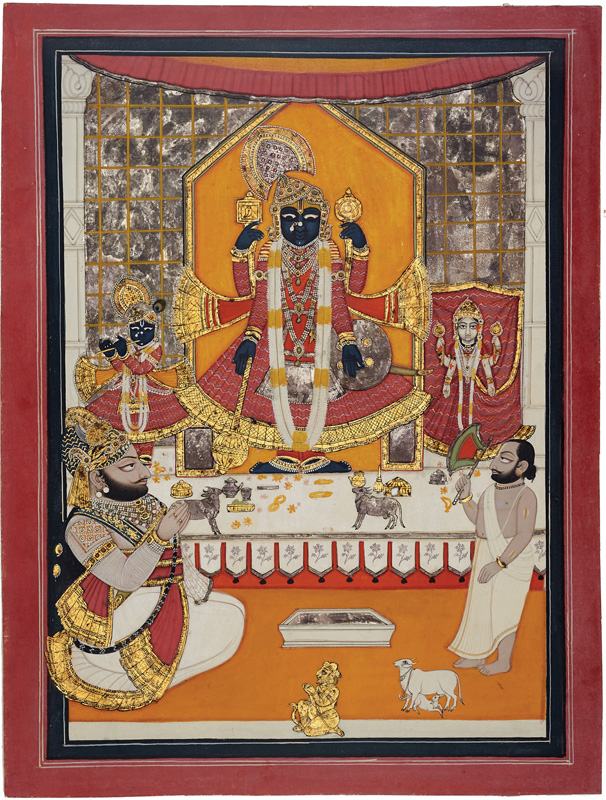 Attributed to Chokha (at Mewar court)
circa 1820 CE

Done in the style of Chokha, a popular master artist from Mewar, this composition depicts Maharana Bhim Singh worshipping in the garbha griha or sanctum sanctorum of the Jagannathrai temple.

Jagannathrai is a form of Vishnu with four arms. This temple was constructed (right outside the Palace walls) by Maharana Jagat Singh in 1651 and was worshipped by all the subsequent Maharanas. Maharana Bhim Singh was of religious nature and a lot of compositions depict him worshipping various deities. This composition possibly depicts the event when Bhim Singh donated cows. In this composition, gold and silver chequered pattern behind the idol denotes the mirror work in the temple. A four armed Devi and a blue complexioned idol of Krishna playing a flute are placed on either sides of the main idol. A number of small vessels and other objects are placed on the platform in front of the idol and a golden Garuda and a white cow are placed in foreground.

Bhim Singh is shown in his royal paraphernalia, carrying his sword and shield and is seated in the foreground with his palms joined. A priest is performing the seva (fanning with a hand fan).