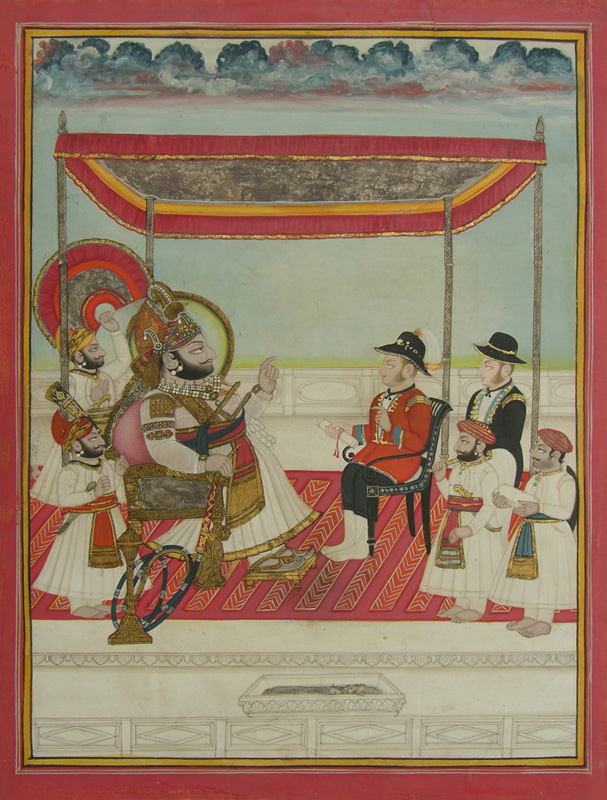 Maharana Bhim Singh succeeded his bother as the ruler of Mewar in 1778, at the young age of 10, under the supervision of his mother. In 1817 Colonel James Tod was appointed as a survey officer by the East India Company. He documented and mapped the entire regions of Rajasthan, Madhya Pradesh and Gujarat. Later he was appointed as a political agent and was responsible for several agreements signed between the different Princely Rulers and the British. This portrait is the documentation of such an agreement being discussed between Maharana Bhim Singh and Colonel Tod.

During the half-century from c. 1770 to 1820 many of the most inventive and expressive paintings produced in the Mewar region of Rajasthan were the works of a family of artists based principally at Devgarh. The leading members of this gifted family were Bagta and his son Chokha. The Devgarh style of painting has compositions that are densely packed with figures, landscape details and uses bright colours. Chokha was the finest court artist employed by Maharana Bhim Singh. His work is robust, sensuous, playful, and resourcefully eclectic in style, and it often reveals an earthy sense of humour.