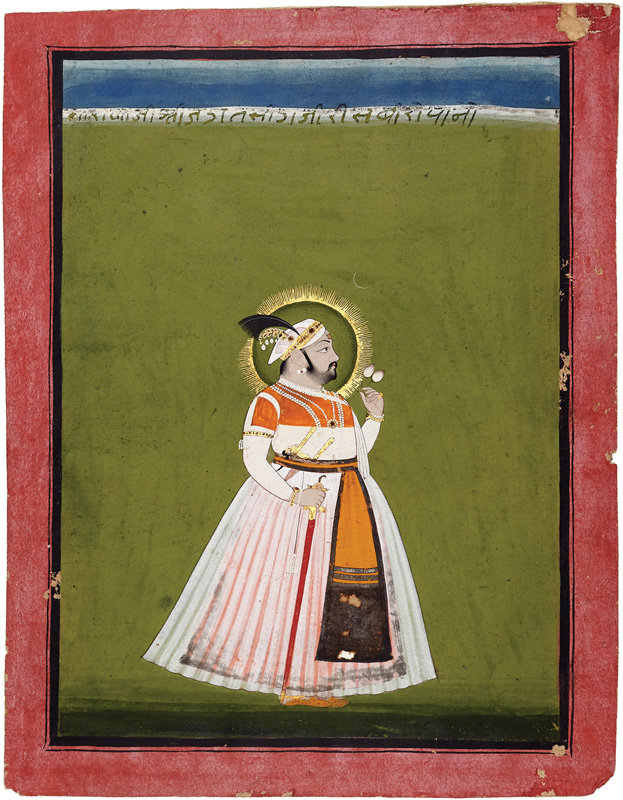 Maharana Jagat Singh is depicted here in a courtly portrait style which developed under the influence of Imperial Mughal culture. Holding a flower bud in one hand and a sword in other brings out his persona as an aesthete and a brave Rajput custodian.

Besides architectural undertakings, he is known for his call of a peace meeting, held in 1734, the Hurda conference. Immediately after his coronation, Maharaja Sawai Jai Singh of Jaipur and Maharaja Abhay Singh of Jodhpur, along with the rulers of Bundi, Kotah, Karauli, Nagaur, Bikaner, Kishangarh and others paid him a visit and gathered in Hurda to sign an ikrarnamah for unity and peace, as mutual protection against repeated Maratha attacks in Rajputana. Keeping up with the history of Rajputs, this attempt towards unity had proved futile.

Jagat Singh’s bulky stature is draped in a voluminous semi-transparent jama worn over an orange inner garment. Silver on his elaborate patka appears to have been charred. His bejewelled amarshahi turban is adorned with a plume. Slightly embossed pearls around his neck, his tilak mark and radiating golden nimbus around his face are neatly carved.