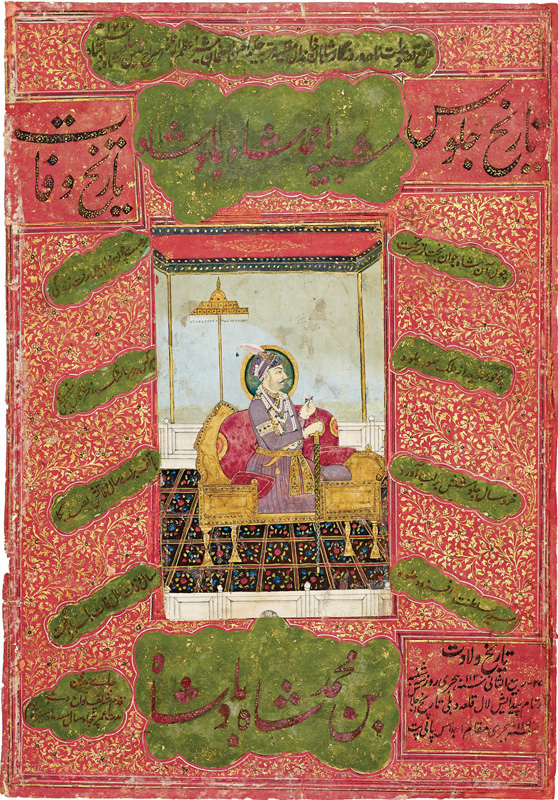 Ahmad Shah was the son of Mughal Emperor Muhammad Shah. He succeeded his father to the throne as the 15th Mughal emperor and ruled between 1748 and 1754.

Ahmad Shah had posted Safdarjung, Nawab of Awadh, as Mughal Grand Vazir to handle the administration of the empire. However, Safdarjung was unable to run it proficiently and spent most of his time in internal strife and in increasing his own power and wealth. In 1753, Ahmad Shah appointed Imad-ul-Mulk as the new Grand Vazir to counter the growing influence of Safdarjung. Imad-ul- Mulk gathered the opposition and defeated Safdarjung forcing him to go back to Awadh. However, the administrative weakness of Ahmad Shah led to the rise of Imad-ul-Mulk, who aided by the Marathas, turned against Ahmad Shah Bahadur and arrested the Emperor and his mother. In June 1754, he blinded the Emperor, who spent the remaining years of his life in prison and died of a natural cause in 1775.

In this portrait, the Emperor Ahmad Shah is presented in profile facing right, kneeling on a throne wearing a purple Jama. Brilliant white strands of pearls interlaced with emeralds are wrapped around his turban, neck and wrists. A red velvet Shamiana (canopy) with black and gold borders is stretched overhead on tent poles.