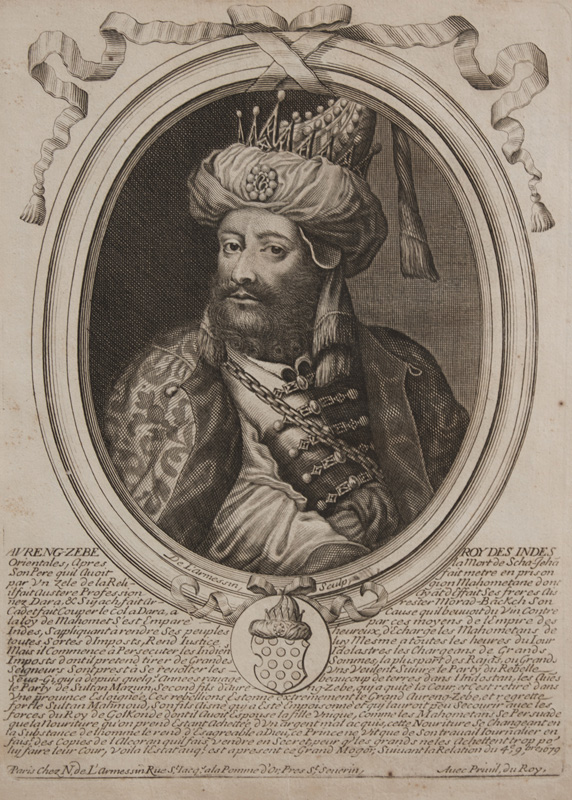 Sixth Mughal emperor who ruled over most of the Indian subcontinent. Although the Mughal Empire reached it’s greatest extent under his rule, it was also fatally weakened by a series of revolt and the empire fell apart soon after his death.

Aurengzeb, king of the India. After the death of Shahjahan, his father whom he had put in prison by a Muslim religious zeal (which he practiced austerely), he defeated his elder brothers Dara and Sujach, had his younger brother Murad-Baksh arrested, and cut Dara’s throat because he drank wine against the law of Mohammed. By these measures he gained the empire of India. Set himself to making his people happy, exempted Muslims from all taxes and dispensed justice personally at all time of the day. But he started to persecute the idolatrous Indians, taxing them highly. The Rajas and ‘great gentlemen’ were ready to join the party of the rebellious Shivaji, who during the several preceding years had ravaged many lands in Hindustan. The party of Sultan Mazum, second son of Aurengzeb had quit the court and retired to a distant province. These rebellions greatly surprised the great Aurengzeb. Regrettably Sultan Mahmoud, his eldest son, was poisoned, and had married the only daughter of the King of Golconda. Mohammedans believe that food bought by ill-gotten money makes a man disagreeable to God. This prince didn’t realize this in his daily work, he made copies of the Quran that he sold in secret, at excessive prices to men who wanted to pay homage to him. This is the current state of great Mughal, as of September 4th 1679.

The above is an English translation of the original French travellers note printed below the portrait.