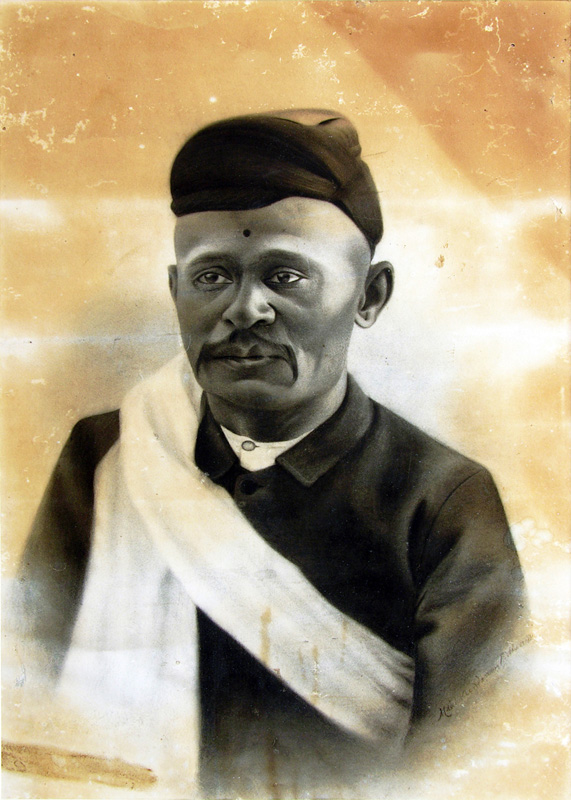 Portrait of an Unknown Gentleman

Mahadev V. Dhurandhar was also called Rao Bahadur, a title bestowed on him by the British government, was the first Indian director of the Sir J. J. School of Art, Bombay in 1930. Dhurandhar was born in Kolhapur, Maharastra. His father supported his sons artistic talents and put him under the tutorship of famous painter Abalal Rahiman. He then joined the Sir J. J. School of Art in Bombay in 1890. Dhurandhar describes his first day at school, going to class carrying a drawing board, a shading box and drawing paper. He was to be taught the importance of tones with simple plaster cubes, cylinders and spheres which were placed against a white screen. The learner began with freehand, which was subsequently shaded by him to bring out the different tones of three aspects of natural light: incidental, reflected and diffused. After mastering simple tones, he proceeded to higher stages, shading of foliage and antique casts.

This portrait of an unknown gentleman seems to be an early work of Dhurandhar, probably done during the time when he was a student. In fact, his sign also seems undeveloped, which he could be using in his early years. Over here he has signed his entire name and gradually he shifted to signing only initials.