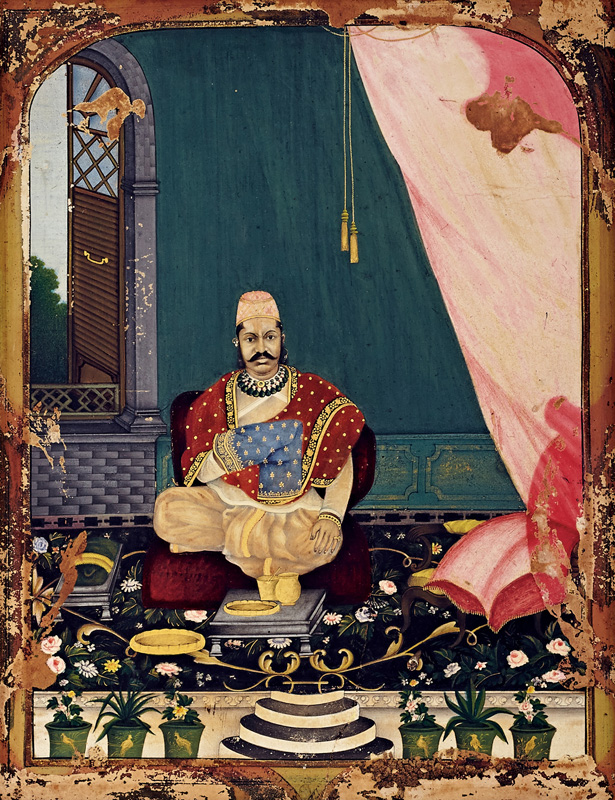 Portrait of Govardhanlalji in “Company style” with colonial settings

by Unknown Artist
Nathdwara
circa 1900

Govardhanlalji’s reign as Tilkayat is considered the golden age of Nathdwara when art flourished in numerous forms with experimentation of styles. One such different style is seen in this portrait in the “Company” style of painting which traces its influence to the British East India Company. The Britishers were in the habit of taking Indian art and artifacts as souvenirs when they returned back home to Britain. To cater to this demand, artists started amalgamating European décor and influences into their own paintings. This became known as the “Company” style.

Here, Govardhanlalji is shown sitting on a mattress laid out on a floral carpet. He is not wearing his princely clothes but is dressed in devotional attire with a skull cap on his head and holding a rosary bead bag. A maroon shawl is draped on his shoulders which signifies that this portrait was probably painted in winter. This portrait is painted, as if Govardhanlalji is seen from an open window. The window frame is seen in the foreground alongwith a pink curtain and potted plants on the window sill. Behind Govardhanlalji, a colonial style window can be seen in the background.