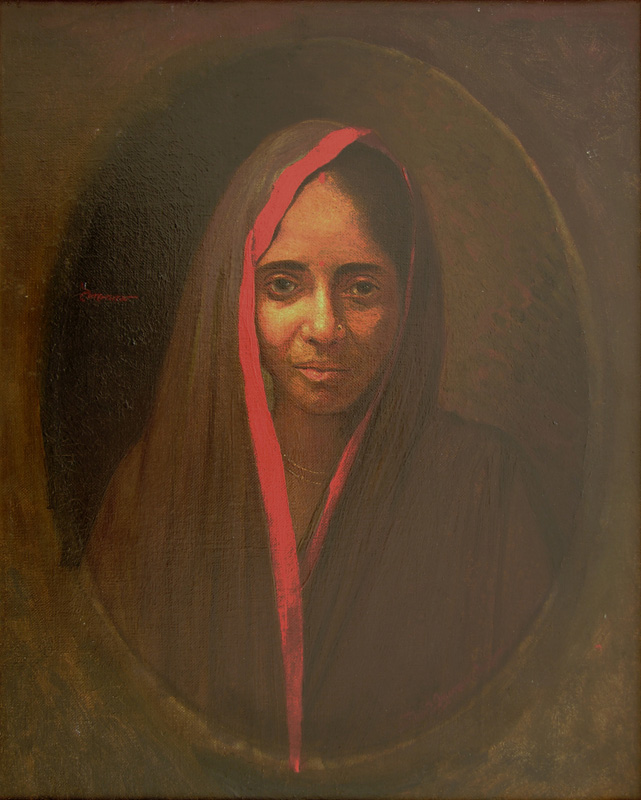 Jamini Prakash Gangooly was born in 1876 in the house of the Tagores at Jorasanko in Calcutta. His first initiations in art came from the young Abanindranath Tagore. Like many affluent gentleman artists, Gangooly was also the product of a parallel circuit of private art training at home from a Bengali tutor, Gangadhar De and then from a British painter named C. L. Palmer. He never became a part of the Bengal school panorama as he was more interested in the Victorian stylistic values. Thus, he embraced in practice and concept the European academic style of visual expression and mastered the medium of oil on canvas. In the beginning of his artistic journey, Gangooly painted literary themes, and his paintings and illustrations of Indian classics added a visual dimension to the intellectual mind set of his time. He showed his flair in various genres, ranging from portraiture to neo-classical and mythological ranges. He was a celebrated portrait painter of his time and worked for many princely states. The skills he commanded in illusionist oil painting, realist portraiture and landscape, were all part of the essential training that marked the formation of the new professional artist in colonial India.

The inscriptions on the front of the portrait read ‘To Shailen’ (in Bengali). Here you can also see his mastery in the shifting gradations and variations of light, which Gangooly obtained not just by studying nature but through the transience of the human face, captured with relation to changing light.