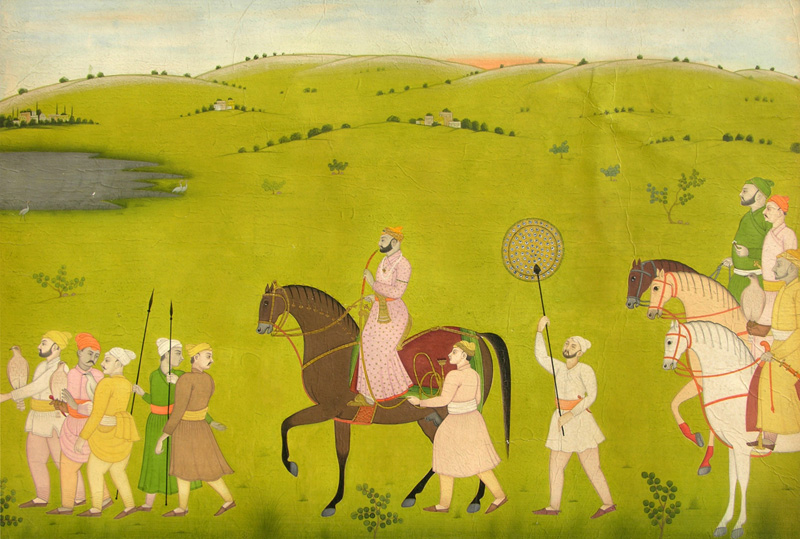 There is not much information available about Prince Balwant Singh for whom the artist Nainsukh worked for a period of more than twenty years. We know the fact that he was not a ruling prince. But there are different views on his circumstances and the state to which he belonged, Jammu or Jasrota.

Nainsukh came from a family of painters that settled in Guler in the northern hills of India. He trained with his father, Pandit Seu, alongside his brother, Manaku. Nainsukh entered the service of Prince Balwant Singh of Jasrota, a little principality near Jammu, and stayed with the prince for the remainder of his patron’s life. The paintings that survive from that period record everyday activities in the prince’s life, including riding through the countryside, listening to musicians, enjoying huqqa, and hunting. Nainsukh renders each figure, their costumes and surroundings with exceptional sensitivity and delicacy, imbuing them with humanity. His images extend an invitation to the viewer to participate and enjoy the scenes depicted. In this portrait you can see Prince Balwant Singh, wearing a pink gown secured by gold patka and pearl jewelry, holding a huqqa pipe, is riding a brown coloured bay horse, probably on his way to a hunting expedition. The stretch of land is considerable and Nainsukh pays it close attention; he marks it with just a few undulations and shrubbery, brush and little trees.