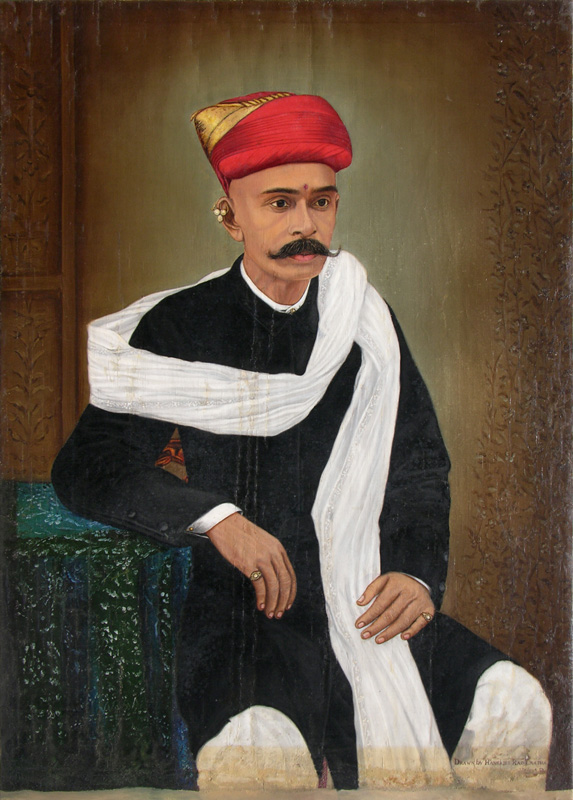 Vrajbhukhandas was born in a Vaishnav family that had a philanthropic background since the last 5 generations. His business was very successful and flourished to Bombay, Bharuch, Ahmedabad, Ujjain, Indore and Ratlam. He was honoured andbestowed upon by the Princely States of Sindhya and Holker. As a philanthroper, he built several dharamshalas and schools in Surat and Bombay. He was highly respected that even the Nawab of Surat would stop his royal procession, for a while, outside his residence as a sign of respect. He had two wives but no children. His family suffered many losses in the flood of 1883 and fire of 1889 in Surat.

Hansaji Raghunatha was one of the pre-art-school painters. Oil painters in India before 1860s, were not given the scholarly attention that was usually lavished upon Company painters. A mixed style of oil painting flourished all over India that bridged the seeming gap between Company watercolours and later academic oils. Initially the competition from the visiting Europeans, whose portraits had already filled the princely courts, seemed insuperable. But, Hansaji Raghunatha and few others carved a niche for themselves for the ‘adapted’ western mode. In fact, Hansaji later became the court painter of Baroda. His portrait of Maharani Jamnabai, painted in 1878, is now part of the Fatehsingh museum, Baroda.