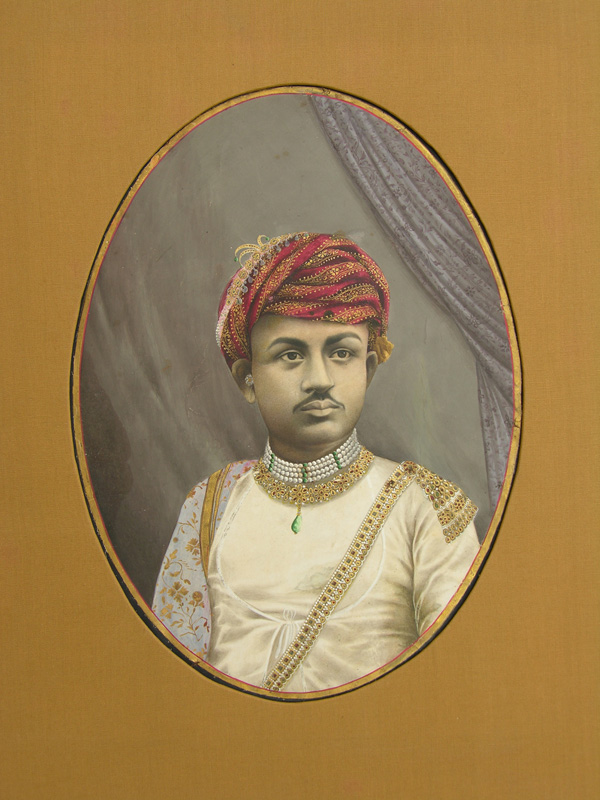 Shri Karansinhji was born at Bhuj in 1871. He was educated at Rajkumar College, Rajkot. He represented his brother, Maharao Khengarji, at Queen Victoria’s Golden Jubilee celebrations in London in 1887. He was honoured with the Golden Jubilee (1887), and Delhi Durbar (1903) medals.

Ghasiram Hardev Sharma was one of the most prolific artist of Nathdwara. His father, Hardev, was the chief painter or mukhiya of the temple of Shri Nathji. His career invites comparison with that of the renowened artist Raja Ravi Varma (1846-1906), although the South Indian master was two decades his senior. Both artists set themselves apart from their contemporaries, who were also intrigued by European imagery, through the superior technique and synthesing capability. Due to his talent and skills many royal families and nobles commissioned him to do portraits. This is one such photo- realistic portrait of his patron. Ghasiram desisted from adding elements from photo-ateliers, such as the small table with the flower pot or books. His emphasis was always on the character rather than the surroundings.