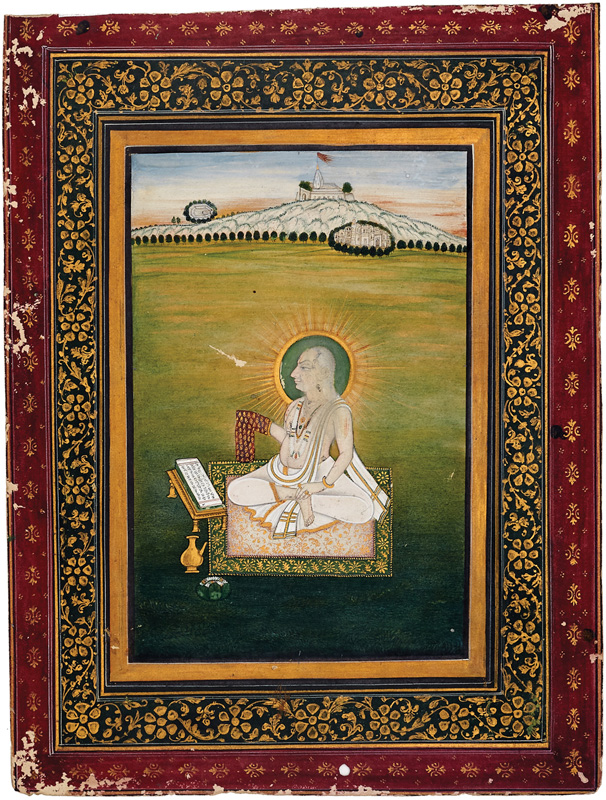 The founder of the Pushtimarg, Vallabhacharya was a mystic person and was blessed with divine vision. He also propounded the methods and rituals for seva, which are practised till day by Pushtimargis.

He travelled extensively and three of his major pilgrimages include: Mathura and Vraja– where Lord Krishna appeared and initiated Vallabha into Bramha Sambandha Mantra. Pandharpur– where the Lord appeared again and commanded him to marry so that his preaching can be carried on, this tradition of hereditary succession remains an important feature of Pushtimarg. Vijayanagara– he impressed the king Krishnadeva Raya with his profound knowledge and was award the title of Acharya. He penned a number of important books on Vallabh sampradaya including Anubhasya, Bramha Sutra, Subodhini and Shodasha Grantha.

Done in a refined early phase of Kishnagarh paintings, this portrait has a deep background which reflects profoundness of the subject. Vallabhacharya is shown clad in a pristine white outfit, chanting on beads and in front of him is a small manuscript with names of all swarups of Shrinathji inscribed on it. In the distant background is mount Govardhan. The play of multiple perspectives and symmetrically drawn nimbus of the Acharya are capturing.