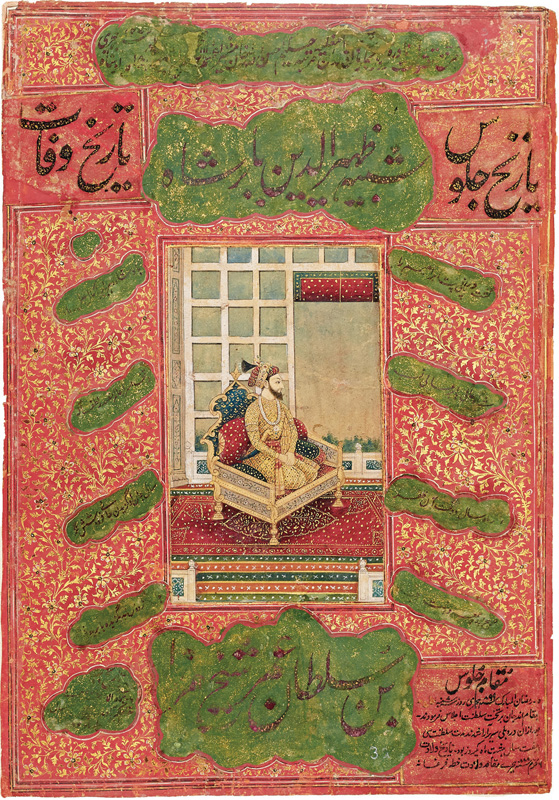 Babur laid the basis for the Mughal dynasty in India and became the first Mughal emperor. He was the direct descendant of Timur and also of Genghis Khan from his maternal side.

Babur launched his campaign to conquer India in 1519. In 1525 he captured Lahore, annexed the Punjab by defeating Daulat Khan Lodi. Later Babur marched onto Delhi via Sirhind and he reached the historical field of Panipat on 20 April 1526, where he met Ibrahim Lodi. Using the war tactic of Tulugma, Babur was able to defeat Ibrahim Lodi’s army. Lodi died during the battle, ending the Lodi Dynasty. After the battle, Babur occupied Delhi and Agra, seated himself on the throne of Lodi and laid the foundation of the Mughal Rule in India.

Babur was a very learned man and wrote his memoirs, which were the main source for details of his life, called Baburnama and were written in Chaghatai, his mother-tongue. This was later translated to Persian by his grandson Akbar.

In this portrait, emperor Babur is kneeling on the throne decorated with gold and silver. His hands are conveniently rested on his legs. He is wearing a golden Jama with pearl white strands in his neck. Maroon and green bolsters are seen around him.