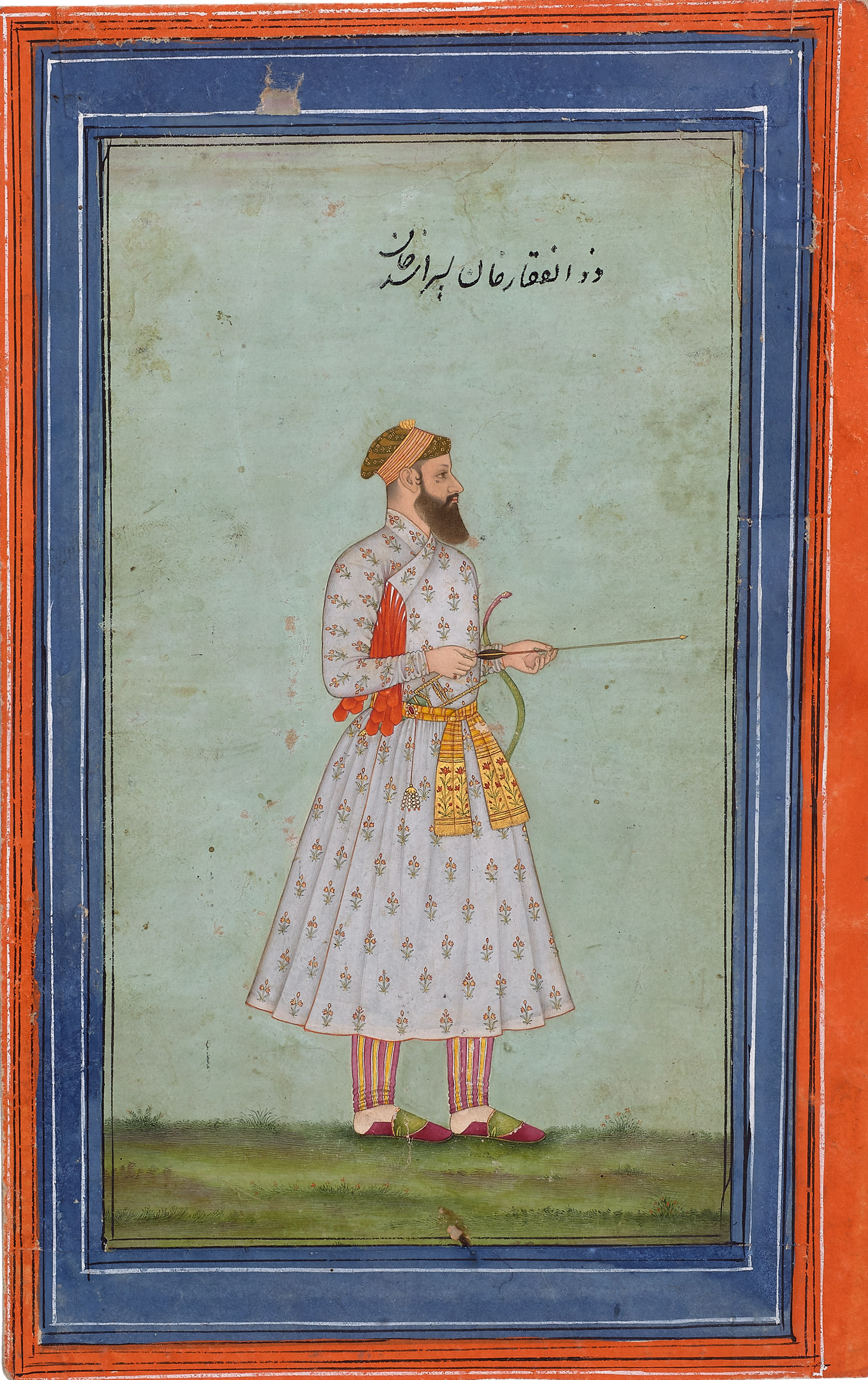 Zulfiqar Khan was one of Aurangzeb’s most important military commanders. He was the son of Aurangzeb’s wazir, Asad Khan and Mehr-un-Nisa Begum (the daughter of Shah Jahan’s wazir, Asaf Khan). During Aurangzeb’s long reign, Zulifqar would take part in several successful military campaigns in the South against the Marathas. He and his father were also key actors in the succession drama that unfolded after the death of Aurangzeb.

In the battle that was fought at Jajau, just outside of Agra, on June 20th of 1707, between Aurangzeb’s sons, Muhammad Muazzam and Azam Shah, Zulfiqar aligned himself with Azam Shah. Ignoring Zulfiqar’s advice to wait and instead mounting a hastily planned attack on the superior forces of Muhammad Muazzam, Azam Shah’s army was thoroughly defeated. Already wounded by several arrows, Azam Shah was finally put down by a musket ball to the forehead. Zulfiqar, who was in charge of Azam’s left wing, survived that day with only a minor wound to his leg.

Muhammad Muazzam, who after ascending the throne took the title Bahadur Shah, forgave Zulfiqar and others that sided with Azam Shah for their disloyalty. The office of wazir was highly contested at this time. Asad Khan, Zuliqar’s father, had held the title since 1676. He and his son were favored for the position by many but Bahadur Shah prefered his long-standing confidant Mu’nim Khan. The emperor was forced to make a number of concessions to Zuliqar, including the power to manage how Wazir Mu’nim Khan used the wazir seal. Zuliqar was also named bakhshi (paymaster) and given the governorship of the Deccan allowing him to amass considerable fortune and influence.

Upon Bahadur Shah’s death in 1712, there was another succession struggle.‘ Azim ush Shan was the favored successor, however Zuliqar Khan would place his considerable power and influence behind Mu’izz ud din or Jahandar Shah helping him to defeat ‘Azim ush Shan and later his other brothers. On January 10th of 1713, in a bid to avenge the death of his father, ‘Azim ush Shan, and claim the Mughal throne, Farrukhsiyar marched on Delhi, defeating Zuliqar and Jahandar Shah’s forces after a bloody battle at Samugarh, near Agra. After the battle, Farrukhsiyer would avenge his father by having both Jahandar and Zuliqar killed.

Zulifqar Khan is shown here, in profile, holding a bow and arrow in a very similar manner as the courtier feature in catalog number 7. The inclusion of such weaponry is a clear allusion to his military prowess. The floral patterns on his jama and patka are very finely painted; each consisting of gold petals, individually lined in red. The floral outlines compliment the portraits most vibrant passage, the ties of his jama, which part ever so delicately under the weight of his right arm. Great care was also taken in the rendering of his face and beard. We do not currently know of others portraits of Zulfiqar Khan, however a fine portrait of his father was recently on display in New York1.