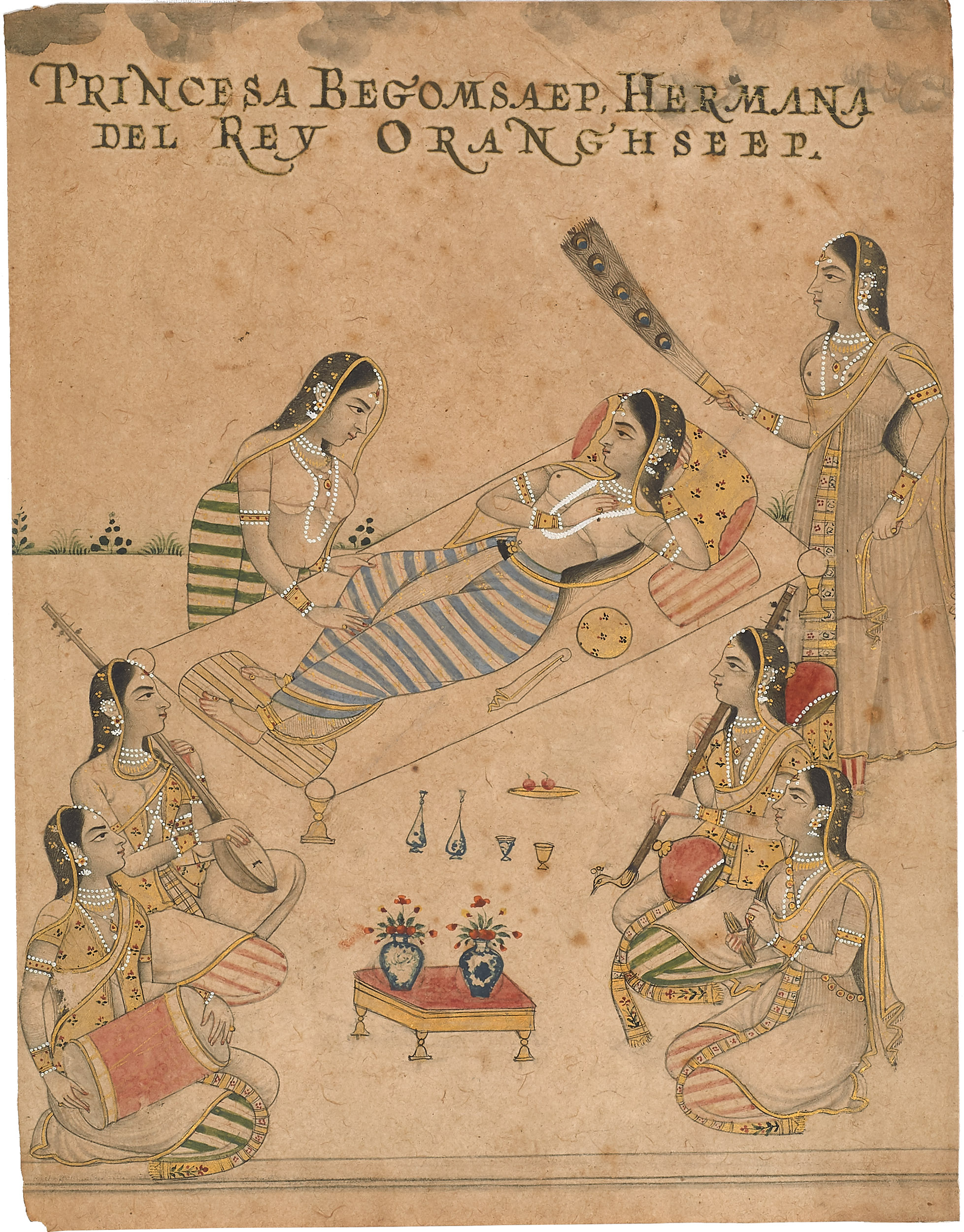 Images depicting the activities of the zenana were exceedingly popular in classical Indian painting from the reign of Jahangir till the end of courtly patronage. The bulk of these images depict a princess relaxing, indulging in wine, enjoying music or a massage, or occasionally, as we see here, all of these things.

This picture is inscribed in Spanish “Princesa Begomsaep Hermana Del Rey Oranghseep”, which translates to “Princess Begum Zeb, Sister of the King Aurangzeb”. This fanciful inscription, whether contemporary or a later addition, was written by someone who had limited knowledge of Mughal genealogy, as Begum Zeb or Zeb-un- Nissa (1638-1701/2) was actually the daughter of Emperor Aurangzeb and his Safavid wife Dilras Banu Begum. She was born in Daulatabad while Aurangzeb was viceroy of the Deccan.

There is a long tradition of producing idealized images of Mughal princesses in India. It is unlikely that many of these portraits bare any resemblance to the women they are said to depict. Our Zeb-un- Nissa is as far from an actual likeness as that of Chughtai or Tagore. While men of means could, and often did, have a good likeness of themselves taken for posterity the memory of a woman’s appearance would in most cases fade with their children.

One account of Zeb-un- Nissa’s appearance describes her as being tall and slim, having a round face, fair in color, and with thin lips, all of which seem to be true of our reclining woman. However, the same account goes on to mention that she favored simple dress, which does not accord well with the lavishly dressed and heavily jeweled woman depicted here.

Zeb-un- Nissa was well educated and is said to have been knowledgeable in many different disciplines. Aside from several imaginative romantic intrigues, she is perhaps best remembered for her poetry. She wrote under the nickname Makhfi (Concealed). Despite having many suitors, Zeb-un- Nissa remained unmarried. Her correspondence with her rebellious brother Muhammad Akbar led to her father, Aurangzeb (cat. 16 and 19), imprisoning her in Salimgarh Fort for the last two decades of her life.