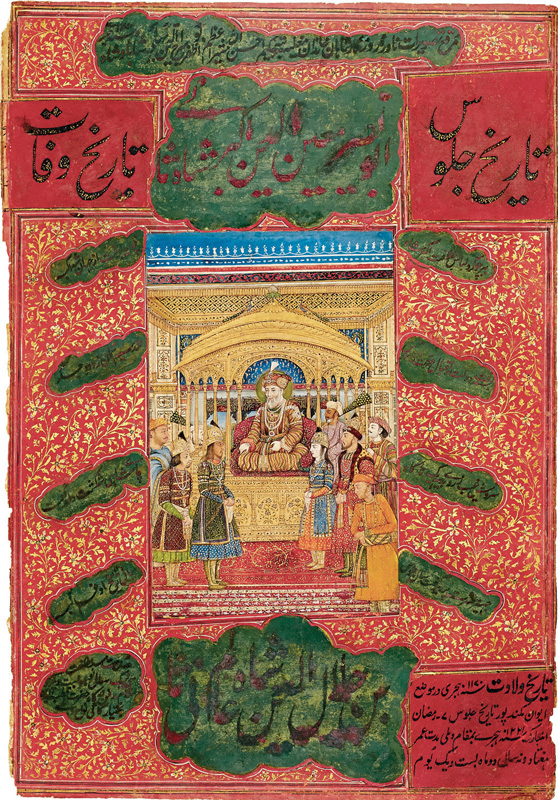 Akbar Shah II was the penultimate Mughal emperor of India. He reigned from 1806 to 1837, was the second son of Shah Alam II and father of Bahadur Shah Zafar.

Emperor Akbar Shah II presided over an empire titularly large but its effect was limited to the Red fort only. He sent Ram Mohan Roy (1772 – 1833) to England for appeal against his treatment by the East India Company, but he was not successful. The cultural life of Delhi as a whole flourished during his reign. This composition (with the same throne setting in the Diwan-i-khas or hall of private audience) is known differently in a number of versions.

In this portrait, Akbar II sits enthroned in durbar with his four of his sons and courtiers before him. The throne upon which the Emperor is seated is a replacement of the original peacock throne. The nimbate Emperor wears a golden Jama while the four princes wear the heavy fur-accessorised garment called Tartar dress. From the left, the four princes are Mirza Babur (1796 – 1835), Mirza Jahangir (1791 – 1821), Mirza Salim (1799 – 1836) and Mirza Abu Zafar Siraji al-din Mihammad (1775 – 1862) who later became emperor Bahadur Shah Zafar.