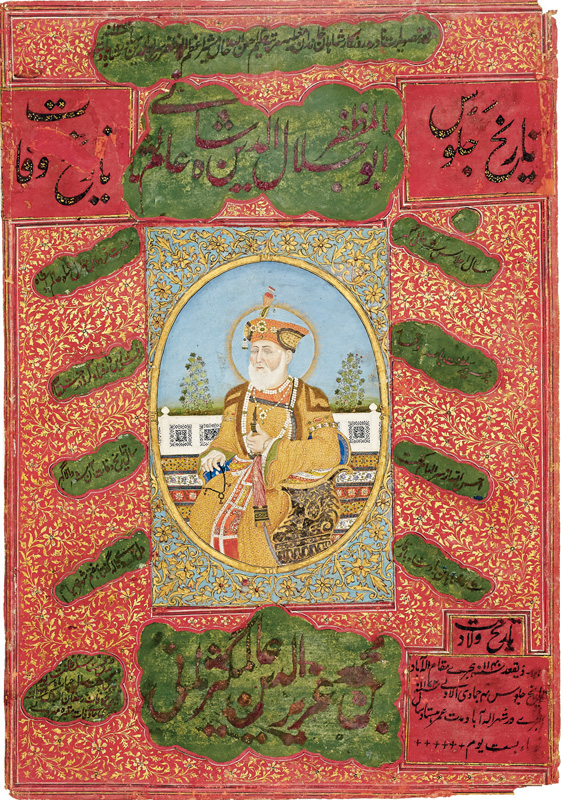 Shah Alam II, originally named Ali Gauhar, was the namesake Mughal emperor of India from 1759 to 1806. He was the son of the murdered Alamgir II. He was forced to flee Delhi in 1758 by his minister who kept him a virtual prisoner. He took refuge with the Nawab of Ayodhya and after his father’s assassination in 1759, proclaimed himself emperor. With the intention of seeking to capture Delhi, he demanded tribute from Bihar and Bengal and thereby came into conflict with the East India Company. Comfortably settled at the city of Allahabad, he sought Delhi, and in 1771 an agreement with the Maratha people of western India returned it to him. In 1788, the Afghan chief of Rohilla, Ghulam Qadir seized Delhi and, enraged at his failure to find treasure, blinded Shah Alam.

Shah Alam spent his last years under the protection of the Maratha chief Sindhia, and the Britisher’s. He was called “King of Delhi” by the British, who issued coins bearing his name for 30 years after his death.

In this portrait, done towards the last few years of his life, Shah Alam is shown blind. He has prayer beads called ‘subha’ in his right hand and a hookah pipe in his left. He is seated on a terrace.