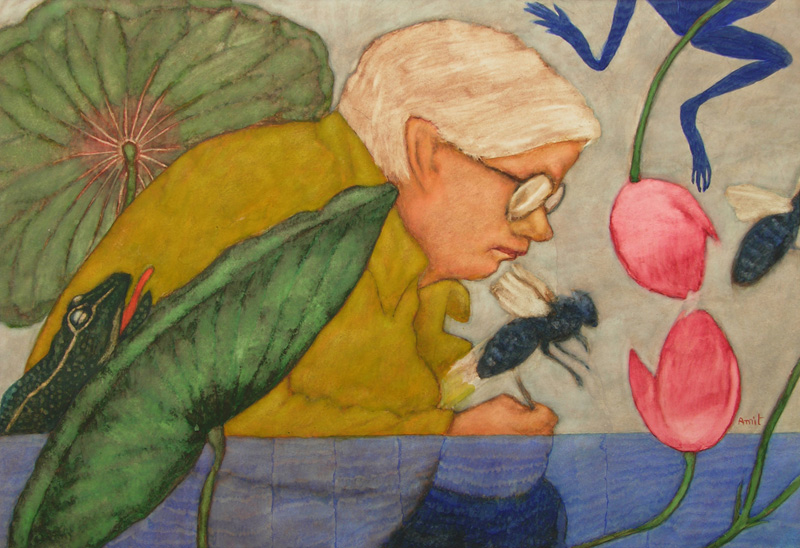 Bhupen Khakhar was born in Bombay in 1934. At his family’s insistence he went on to take a degree as Bachelor of Commerce and qualified as a Chartered Accountant. Khakhar worked as an accountant for many years in Baroda, pursuing his artistic inclinations in his free time. He was a self-trained artist, and started his career as a painter relatively late in his life. His works were figurative in nature, concerned with the human body and its identity. A self-professed homosexual, the problem of gender definitions and gender identity were major themes of his work. Khakhar was a good friend of renowned artist Amit Ambalal of Ahmedabad.

Amit Ambalal has an ability to draw that makes the line obedient to his command while he contorts and swirls his images, creating movement of man, animal and nature. Tempera creates colours of high opacity and richness, while fluid transparent layers develop into fine drapery, water effects and limpid lotus leaves. Ambalal says, “It was in 2002 when Bhupen Khakhar, Atul and Anju Dodiya, Raksha and me went to Haridwar on a sketching mission. In spite of a severe illness – Bhupen remained engrossed in sketching, especially the life on the banks of the Ganga. His posture of sitting and his way of holding the pencil was typical. I noted this in my sketchbook. Later I did a painting from this, showing him having a dip in the Ganga and also drawing, both simultaneously.”