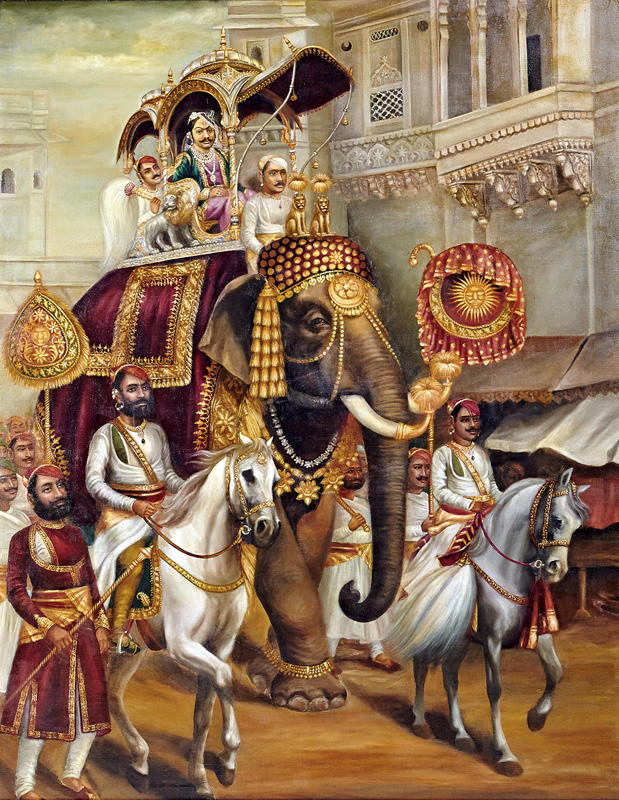 Govardhanlalji passing through a palace while on Tour of Nathdwara

Tilkayat Govardhanlalji used to undertake tours of Nathdwara from time to time. This painting by Kundanlal (c.1860-c.1930) captures one such occasion. This painting is also unique as it differs from the normal style of painting by other artists from Nathdwara.

Kundanlal was the son of a traditional artist and attended the prestigious J. J. School of Arts in Bombay between 1886 and 1889. He was then employed by the Maharana of Udaipur. In 1893, he was sent to England by the Maharana to study at the Slade Fine Art School, making him one of the first group of Indians to study art in Europe. He returned to Udaipur in 1896. Elements of the European style are thus reflected in his paintings.

It is quite evident in this painting as well. It is an oil painting on canvas. Tilkayat Govardhanlalji is shown sitting in a gold and silver howdah alongwith his fly-whisk attendant atop an elephant that has been adorned with gold jewellery and ridden by a mahout. The elephant has a magnificent head covering and a gold tika on its forehead. Necklaces of gold and silver adorn its neck while gold anklets jingle at it feet. The front end of its tusks have a gold caps. Riding on white horses besides the elephant are two important members of his entourage. Their importance can be gauged by the jewellery worn by them. The rest of the group are shown carrying banners. A palace is depicted in the background to show that the Tilkayat was on a tour of the city.