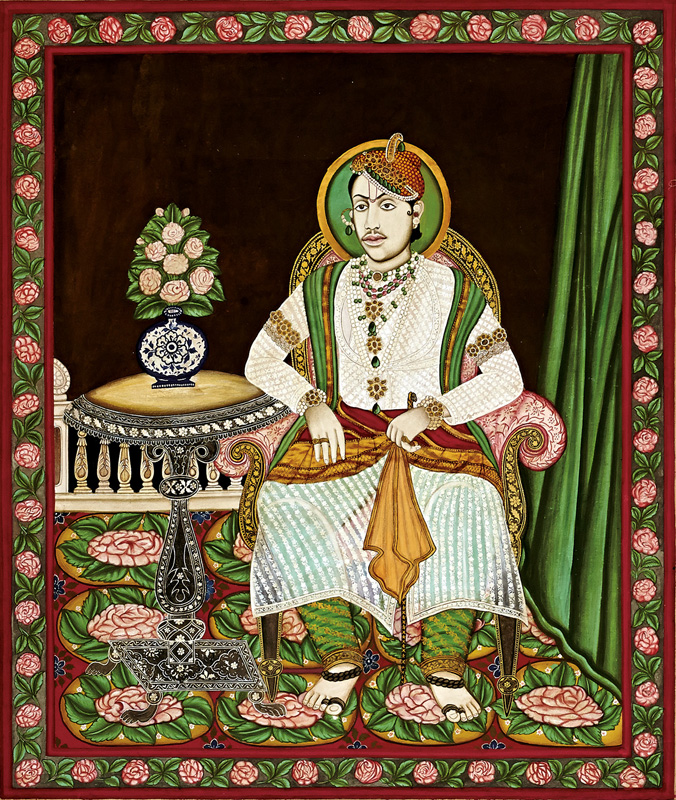 by Unknown Artist
Nathdwara
circa 1875

This is a portrait of the young Govardhanlalji just after he became Tilkayat in 1877. At the tender age of sixteen his father was forced to abandon Nathdwara due to pressure from the British as he was sympathetic to the cause of India’s freedom and had sheltered the freedom fighter Tatya Tope.

In this portrait, Govardhanlalji is seated on a chair with his arm resting on an intricately carved European style table, on which stands a ceramic vase holding roses. His divinity is signified with a halo over his head. The setting of this painting is that of a balcony with a green coloured drape. There is a prevalent pattern of roses throughout and the border of the pichwai has a rose pattern, like the carpet.

Normally, artists of Nathdwara depict gopis holding fans or Vraj Yatra or major events in Lord Krishna’s life are painted on pichwais – which are then used as backdrops in the temple or at shrines of devotees. But in this painting the artist has potrayed the young Govardhanlalji on a tradtional cloth painting using natural pigment made from various stones, plants and flowers mixed with gum. Usually this style is used for painting Pichwais in Nathdwara.