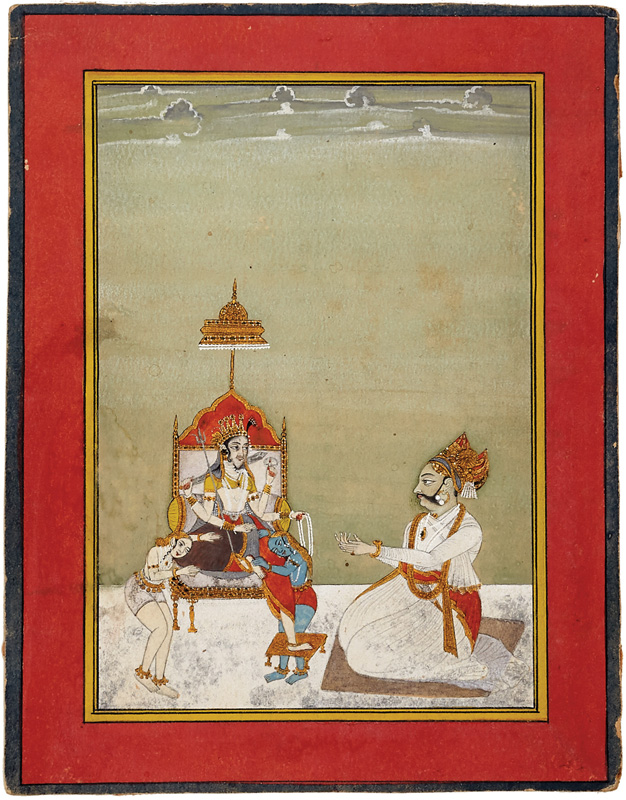 by Bikaner court artist
circa 1770 CE

Karni Mata is worshipped as the incarnation of Durga by rulers of Marwar and Maru region including kingdoms like Jodhpur, Bikaner, Jaisalmer and others.

She was revered and worshipped by Rao Jodha of Jodhpur and Rao Bika, founder of Bikaner, and she supposedly laid the foundation stone of forts at both, Jodhpur and Bikaner.

In this depiction, Maharaja Gaj Singh I, the 14th Maharaja of Bikaner is shown worshipping or pleading in front of an idol of Karni mata. She is depicted as seated on a golden throne placed in the outdoors on a white platform (and not inside a shrine). Mata’s imagery is white complexioned, has four arms (holding various attributes) and gora and kala Bhairava are shown clinging around her feet.

Colours are taken from tertiary scheme teamed with bright red of the border which was an essential feature of Bikaner courtly paintings and was greatly favoured by both patrons and painters.