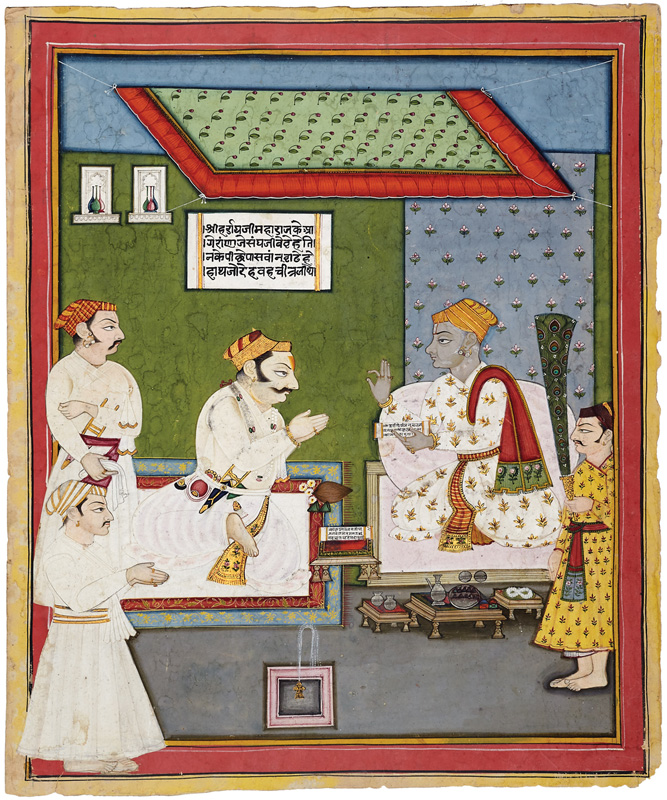 by Mewar court artist
circa 1860 CE

This imaginary composition, done in a mixed Mewar-Nathdwara style, features Maharana Jai Singh paying homage to Goswami Harirayji of Nathdwara Haveli. These two were contemporaneous and may have met as Jai Singh’s father Maharana Raj Singh had issued land to Pushtimargis to set up the idol of Shrinathji. Since then, Maharanas of Mewar became devotees of Shrinathji and used to visit the Haveli and Goswamis frequently.

Original reference for this painting is not yet known. A colophon space has an inscription written in black ink in Devanagari script in a late Mewar dialect, saying Maharana Jai Singh is seated in front of Harirayji Maharaj (there by suggesting higher status of Harirayji than the former). There is also mention of a paswan standing behind Jai Singh and the artist, referred to as the one who ‘chitra lidho’ or made the painting, is standing with joined palms. A horizontal manuscript of Bhagwad Purana is placed in front of Harirayji.