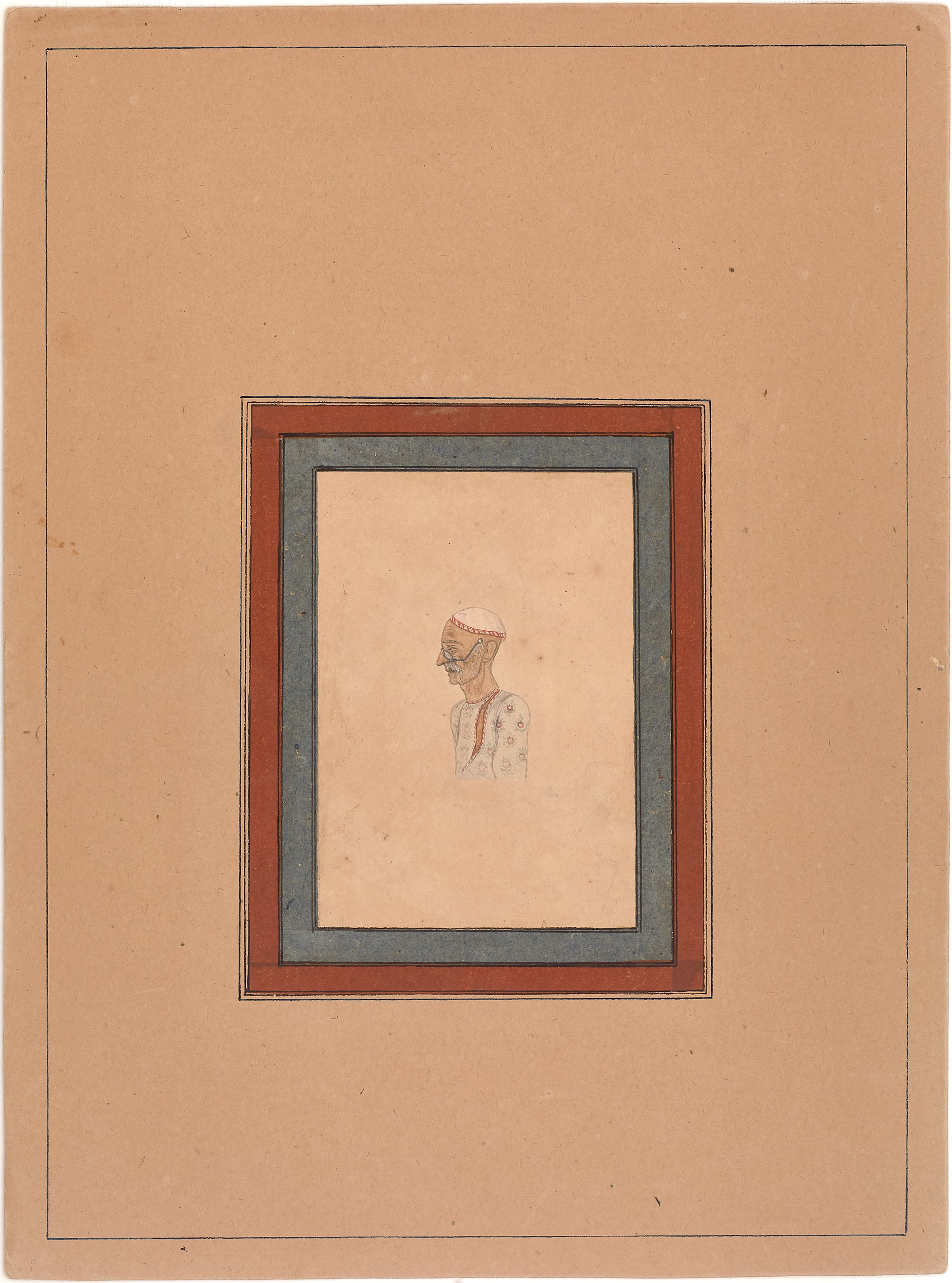 Inscription: (back) Nawab Taqi of Lucknow

A small inscription on the verso informs us that this bespectacled, grey-bearded man is Mir Taqi Mir, whom many consider one of the greatest Urdu poets of all time. Mir Taqi Mir was born in Agra in 1723. His father, Ali Muttaqu and his uncle, and primary caretaker, Aman Allah, were both Sufi dervishes. Naturally, Mir spent much of his youth in the company of dervishes and fakirs, which had a profound impact on his personality and writing. His uncle died when he was ten and his father a year later, prompting him to move to Delhi. There he continued his education and began to seek out patronage.

Delhi was terribly unstable after the events of 1739 and Mir frequently discusses the chaos and anarchy of the times.

Coming back to Delhi, I saw no friends around
Either they departed in a hurry or I was late in comin

Distraught at the destruction of his city and the loss of so many of its inhabitants he accepted an invitation from Nawab Asaf ud Daula to move to Lucknow. While the Nawab was appreciative of his presence, Mir did not feel comfortable at court, where it was said he was old fashioned and wore unusual dress. When asked who he was and where he was from Mir said:

What ask ye, O, the people of the east
about where I belong to
And that too derisively considering me
to be a poor alien
Delhi, a city select of this world
where the chosen ones of the times lived
A city reduced to rubble by Heaven’s ire
To that ruined city I belong

Mir did not enjoy the work of the other Lucknow poets, dismissing it as overly romantic in nature. He also felt his work was underappreciated writing:

After his son, wife and daughter all died in quick succession, Mir’s physical and mental health began to decline and he died in 1810 at the age of 88. This portrait, which may be the only one of the poet to survive, appears to portray him in his difficult later years. Mir Taqi Mir, who is remembered as the “khuda e sukhan” or god of poetry, left behind six diwans containing 13,585 couplets in all.