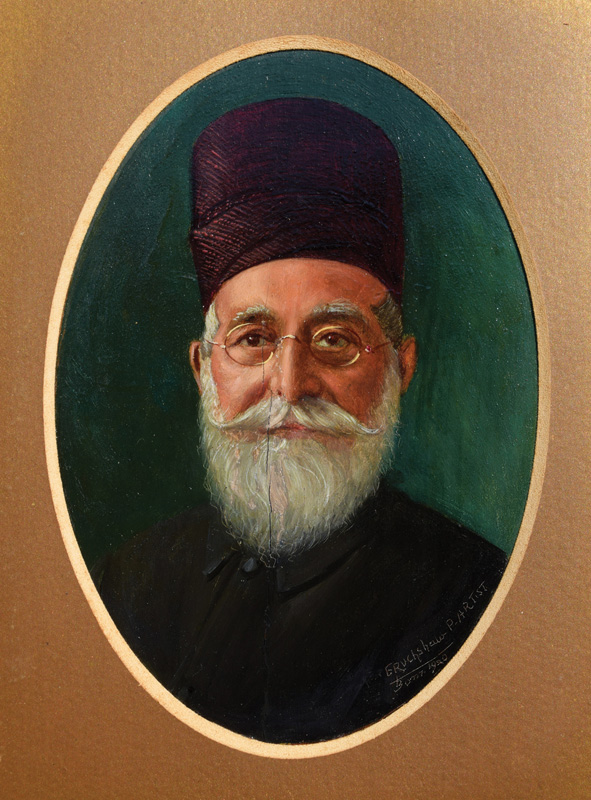 Eruchshaw Pestonji was the son of the famous Parsi realist Pestonji Bomanji. Just like his father, he joined the art fraternity and painted portraits for many prominent members of the Parsi community. It seems that portrait painting was practiced more like a business that a father passes on to his son as a heritage.

The portrait is of Mr. Talati – a popular and respected figure in Mumbai during those days. From a very humble beginning he rose to be the Principal of the Elphinstone High School – Bombay, in
the Presidency then, and was for some time also the Principal of the Government High School at Surat, Ahmedabad and Karachi. He was not a teacher by profession but by choice and teaching was ingrained in his blood. He was like a father figure to his pupils and by dint of sheer hard work coupled with honesty of purpose and clarity of intelligence he was able to rise to important positions. He was the one who first opened a Public School for Parsis based on the blueprint of the Public Schools of England, that he visited. He also made manual labour subjects like carpentry, gardening, etc., compulsory. The government as well as the common people, appreciated his efforts and showered him with many honours.