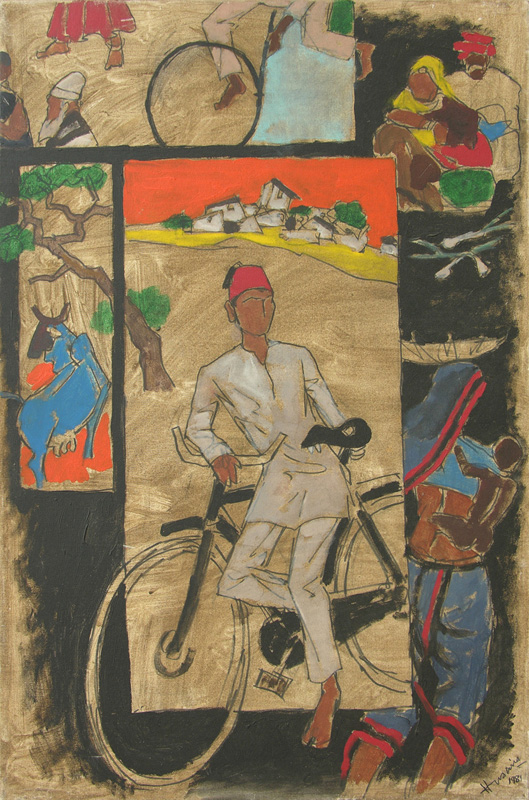 My childhood in Indore

M. F. Husain was born in Pandharpur, Maharashtra in 1915. His mother Zainab died when he was only one and half years old. His father Fida remarried and the family moved to Indore where Husain got his primary education. His association with painting began at this early age as he learned the art of calligraphy and practiced the Kulfic Khat with the geometric forms. His early education was perfunctory but Husain’s love for drawing was evident even at this stage. Whenever he got a chance he would strap his painting gear to his bicycle and drive out to the surrounding countryside of Indore to paint the landscape. In 1935, at 20 years of age, he moved to Bombay with the determination to became an artist. Husain was noticed for the first time in 1947 when he won an award at the annual exhibition of the Bombay Art Society. Husain was awarded the Padma Bhushan in 1973, the Padma Vibhushan in 1989. One of the most celebrated artist of India today, he was known for his emphatic understanding of the human situation and his speedy evocation of it in paint. His experimentations with new forms of art were both unexpected and pioneering.

This portrait was part of Husain’s solo show done for his autobiography series. The painting is Husain’s recollection of his teenage years in Indore. A young Husain is riding on a bicycle with the Indore landscape in the background. In the surrounding he has painted some of his childhood memories.