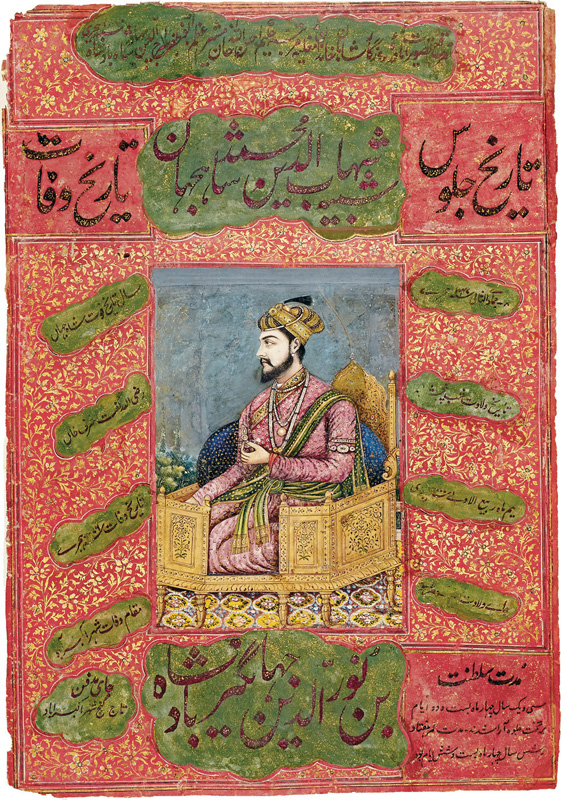 Shah Jahan was the fifth Mughal emperor. He ruled from 1628 until 1658. His birth name was Khurram but his father Jahangir granted him the title of Shah Jahan (Persian: Glory of the world).

Under his rule, Mughal artistic and architectural achievements reached its zenith. The famous Peacock throne, Red fort and Jama Masjid in Delhi, Shalimar gardens of Lahore, Sheesh Mahal and Naulakha Pavillion at Lahore fort, Tomb of Jahangir were all built during his reign. His most famous architectural feat was the Taj Mahal at Agra, now one of the seven wonders of the world, built out of love for his wife the Empress Mumtaz Mahal. When Shah Jahan became ill in 1658, Aurangzeb, his third son, gathered an army and became its chief commander. Although Shah Jahan fully recovered from his illness, Aurangzeb declared him incompetent to rule and put him under house arrest. He spent the last 8 years of his life as a prisoner in Agra fort looking at the Taj Mahal, he had built for his beloved, through its windows.

In this portrait, Emperor Shah Jahan is kneeling on a low octagonal golden throne while resting on large blue bolster. He is holding a pearl studded turban jewel. One can see a thin line, probably for the parasol, but it is missing. This portrait may have been done earlier but later cut to size and pasted in this Muraqqa.