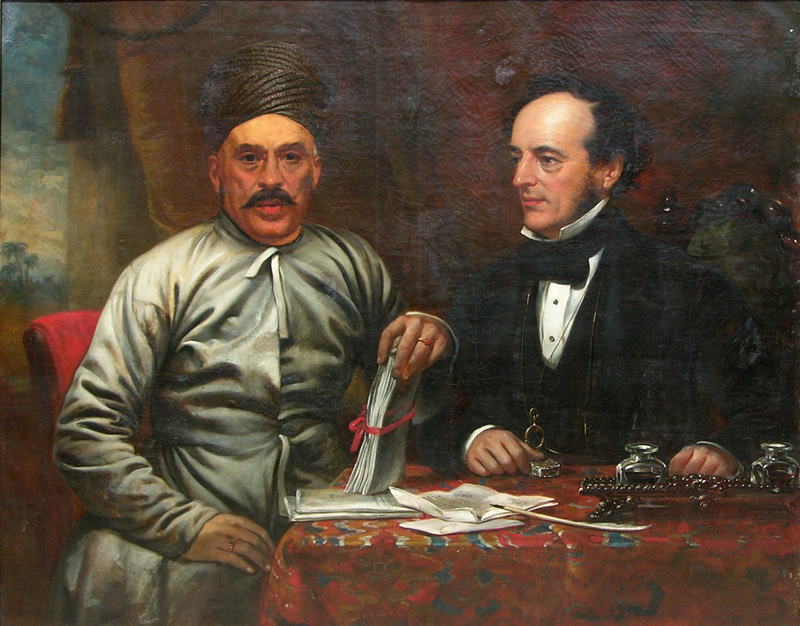 Jehangir Nowrojee born in 1821 in Bombay went to England to study art of ship-building in 1838. On his return, after 3 years, he was posted as an assistant ship-builder. In September 1857 he became master builder and during his tenure some 19 ships, and gunboats were built. He was appointed justice of peace in 1860 and in 1864 as a surveyor of steamships. Oliver Miller White, a prosperous merchant and steamboat agent, commissioned William H. Baker to paint this portrait to document and gift his friend on celebrating the status of becoming a Master Ship Builder.

Originally from New York, William H. Baker was in Nashville, Tennessee, by the mid-1840s. Baker came to New Orleans initially to work as a merchant. After a stint in a local art studio in 1848, he decided to pursue a career as a portrait painter. Baker left New Orleans in the summer of 1855, and by 1865 he had permanently settled in New York City, where he exhibited portraits and genre paintings at the National Academy of Design and the Brooklyn Art Association. The Louisiana State Museum, USA has three other William H. Baker paintings, including a portrait of famed Louisiana actress and poet Adah Isaacs Menken.