by Studio artist of Kaiser-I-Hind
dated 1878 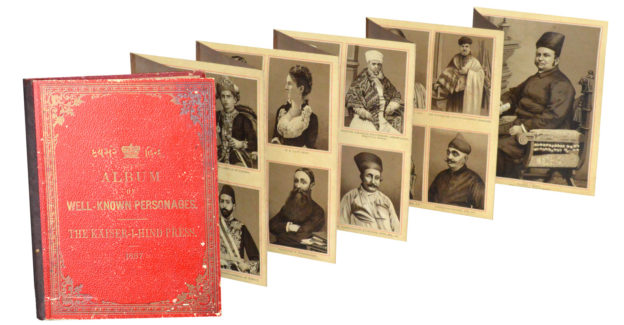 In 1878 the Government of India passed the Censorship Act and protests from the press had no effect. Four years later, in 1882, the newspaper Kaiser-I-Hind was founded by Framjee Cowasjee Mehta. This became a platform for the fledgling Congress from its inception in 1885. This weekly journal of literature, politics and other news had an extensive circulation in Bombay and Mofussil. It was published in both Gujarati and Anglo-Gujarati every Sunday morning.

As a gift for its subscribers, the Kaiser-I-Hind Press published this album of Well-Known Personages. This accordion album contains 43 tinted-lithographic images of well-known persona

lities which include some British, Maharaja’s and prominent Parsis. A large full-page portrait of the editor and proprietor of the newspaper, Framjee C. Mehta, is printed on the last page.