by Maganlal Sharma
circa 1900

Maganlal Sharma was a primary school teacher who got inspired by the freedom movement of, India that had started in various parts of the country. He drew many portraits from mythological stories of deities and characters. This passion for freedom and his likeness for the works of Ravi Varma, made him draw the first imaginary picture of ‘Bharatmata’. This picture became very famous throughout the country and he also came to be known as an artist. He also wrote about art for the evening newspaper. There has also been speculation that the image of Bharatmata was probably an adoption of the same from Abanindranath Tagore’s version of it.

This portrait is of a philanthropist from Gujarat. He was also a member of the 6th Gujarati Literature Conference and a known figure in the literary circle and patron of art. 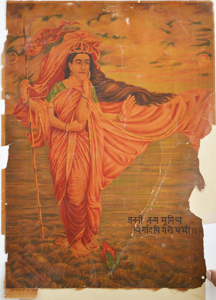