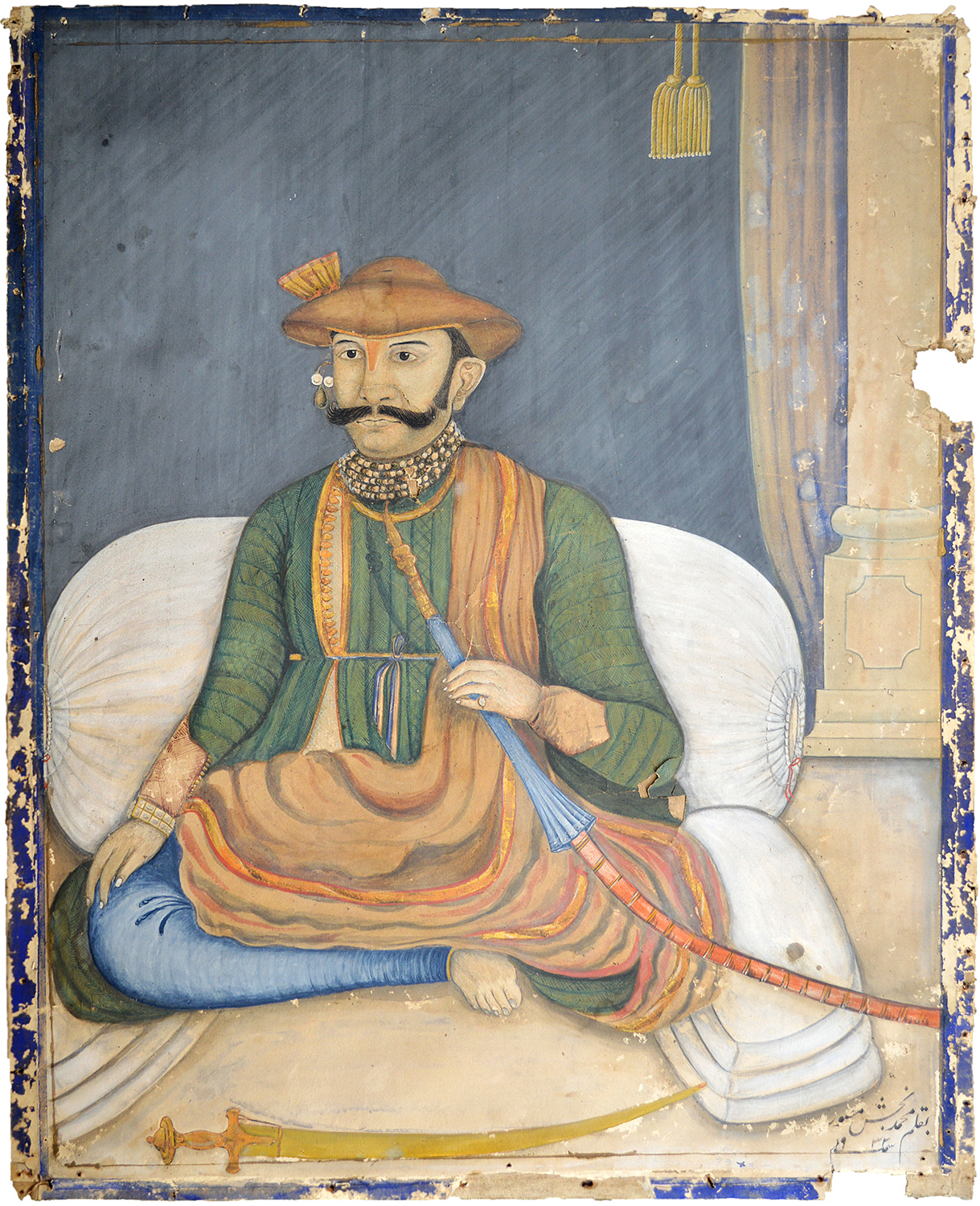 Sambhaji Rao Angre was a descendant of legendary Maratha Navy chief Kanhogi Angre, who fought against British, Dutch and Portuguese naval interests in the Arabian Sea with great success during the 18th century. The Angre family was originally from Alibag, in present day Maharashtra. In search of opportunity, Sambhaji’s father, Mawji and his uncle, Baboo, moved to Gwalior to live with their sister, Mena Bai, who was the mother of Maharaja Daulat Scindia.

Sambhaji’s uncle, Baboo, went on to become an important member of Maharaja Daulat Scindia’s court, serving as Vazir. He was gifted Bhowrasa, Neori and Panbihar in jagir for his services. Since Baboo Angre was childless, he adopted his brother son, Sambhaji. Right away, Sambhaji earned a reputation for curbing the widespread banditry in Malwa. He would go on to serve as Vazir for Maharaaj Jankoji Rao Scindia II and Maharaja Jayajirao Scindia (cat. 46).

Sambhaji was very much responsible for Jayajirao becoming Maharaja. It is said that as Jankoji lay on his death bed, with no male heir to succeed him, Sambhaji road out to find a child from the extended family for Jankoji to adopt so that the British couldn’t evoke the doctrine of lapse. He stopped upon a group of young boys playing marbles and noticed one of them making a particularly difficult shot from an extended distance. Sambhaji took it as a sign and grabbed the eight-year-old boy and hurried him to the palace so that the Pandits could perform the adoption rituals. The process was completed on February 7th of 1843, shortly before Jankoji passed away.

While the artist of this large posthumous portrait, Muhammad Bakhsh, has not previously been recorded, he may be related to the celebrated 19th century Gwalior court artist, Imam Bakhsh. Our artist’s selective incorporation of shadows, here applied to the muhnal (mouth-piece) of Sambhaji’s hookah, is a feature also found in the work of Imam Bakhsh. A similar portrait of Sambhaji Rao Angre, which is certainly by the same artist, was published in C.B. Burrows, 1901, Representative Men of Central India. Sambhaji Rao Angre’s palatial home, Sambhaji Vilas, in the old town of Gwalior, still stands and is currently being operated as a guesthouse by his descendants.